(Lucky) Me and the chance of a lifetime…

One of the themes I wanted to build into my novel The Daylight Thief was the starring role that providence plays in our history.  Many of us could readily cite specific examples of this… maybe

Alexander Fleming’s accidental encounter with Penicillin… or even the thin dividing line that exists between a failed and a successful world-changing assassination attempt (Napoleon, Hitler or any number of American Presidents and Russian Tsars all had close shaves … whilst others weren’t so lucky). However, in my view, it is the process of evolution through natural selection, illuminated with such clarity by the likes of Darwin and Wallace, that best demonstrates the beneficent catalytic effect that chance plays in our past.

Whilst most of us might recognise this, my sense is that we still largely overlook the role chance plays in our personal evolutionary stories.  In particular we are oblivious its role in forging the relationships which connect us to the generations that came before us and that ultimately formed our DNA… and us. Husbands and wives, mothers and fathers, grandparents, great-grandparents and so on… relationships that we sometimes take for granted in the sense that they just happened to ‘be there’.

Just think about it for a second or two… each of those relationships needed a single moment when two people met each other for the very first time. It might have been a physical encounter, accidental or otherwise, or maybe just eye contact across the proverbial crowded room. Perhaps that single moment happened in an explosive coming together or maybe it simply initiated a chain of outwardly unremarkable events that ultimately forged one of those crucial links in our family tree. In my novel,  Jack and Freda’s first meeting takes place in the benign surroundings of a green meadow and they, presumably like our ancestors, have no inkling of the life-changing consequences that will flow from it.

So is there a common thread prompting these momentous events to happen? I believe that chance is the critical factor, thus demonstrating the Darwinian randomness of our personal histories. I’ll give you an example: My first encounter with my first wife was at work, in the office… whilst attending a union meeting to be precise. Now – I didn’t always attend those meetings by any means and my decision to attend on that day would have depended on a number of factors, such as how busy I was, what was on the meeting agenda – it might even have been Friday afternoon and I fancied a bit of an easy end to the week. As it happens I can’t remember the full details, but the point is that I could just as easily not have attended the meeting. So what would have happened if I had chosen not to go? Well, in blunt terms the likelihood is that we wouldn’t have eventually married and… following that thread to its logical conclusion… neither would my son have been born etc.

“Well fate decrees that you and your first wife would have met anyway in another situation. These things are pre-ordained after all, aren’t they”?

Sorry – but I have to tell you at this point that I do not believe in pre-destination. I do believe, however, that there is something akin to a roll of the dice at play in our genealogy (aka our evolution).

I’ve been tracing my fam

ily history for about 30 years.  To date  I can trace some of my family lines back through 15 generations. Even with my horribly shaky maths I can work out that 15 generations means 65,534 individual people, all of whom must have met a partner along the way. That’s 32,737 separate meetings that had to take place to produce me… and, of course, that does not even come anywhere near scratching the surface.

Calculating the numbers after this point might get a little trickier because research shows that after a period of time the possible number of ancestors you can have tails off and actually starts to shrink. The theory goes that the populations are smaller the further back in time you go and our family lines start to be descended from a smaller pool of ancestors i.e. the same individuals. Even despite this, to work out how many generations it would take to trace my history back to, say, our early African hominid ancestors is well beyond me, let alone how many meetings or individual beings that would add up to. Suffice to say though it will be a staggering, incomprehensible, number; but if any of those first meetings had not happened, then I wouldn’t exist and neither will the generations who would have come after me.

My research, disappointingly, has furnished only sparse specific details about a paltry few of those 32,737 meetings . Where I do know the story, however, the role played by chance is clear, thus: 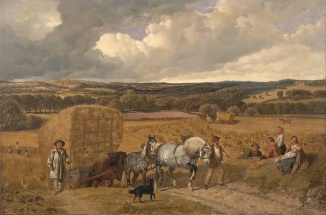 In 1841 my Great Great Great Grandfather Charles Harriman was labouring on a farm in Sutton Bonington, Leicestershire. Another worker on the farm happened to be a chap called Thomas Gascoigne. Thomas had a sister called Elizabeth. At some point Thomas must have introduced Elizabeth to Charles, because the two of them were married the following year. So what if Charles had gone to work on another farm or he didn’t get on well enough with Thomas to be introduced to his sister?…

In the 1870s my Great Great Grandfather Frederick Henry Williams lived with his mother at 75 Manvers Street in Sneinton near Nottingham. At the same time, directly across the road at 80 Manvers Street, lived my Great Great Grandmother to be, Elizabeth Forbes Nevett. Elizabeth’s father was a shoemaker and Fred was a painter and decorator by trade, so they may have encountered each other from a business perspective, but Fred’s mother and Elizabeth’s father also died within 8 months of each other in 1878 and 1879. It is tempting to believe then that, in this case, a perfect storm of geographical and emotional proximity helped bring Fred and Elizabeth together. Could it have been different if their parents hadn’t died at that particular time?  Of course they may not have ended up living across the street from each other anyway. In any event they were married soon after their parents deaths, in December 1879…

‘Annie’ Parker, my Great Great Grandmother, was born ‘illegitimately’ in the tiny village of Peatling Magna, Leicestershire in 1867. Her mother married a couple of years later and moved away from the village altogether to start a family with her new husband. Annie was left behind and lived with her Grandfather and later with an Aunt in Leicester. In the 1880s, however, and what changed is not clear, Annie moved back into the household of her mother and step-father. At this time they were resident in the Nottinghamshire village of Wilford. It proved to be a life-changing move beyond simple reconciliation with her mother. Whilst there she met John Lees,  a native of Wilford and my Great Great Grandfather, marrying him in 1888. How different it would have been if Annie had stayed in Leicestershire?…

In the late 1890’s, after her widowed mothers second marriage, my maternal Great Grandmother Julia ‘Annie’ Buckingham became the step-daughter to one of Baron Saville of Rufford’s Farm Bailiffs. She lived at Python Hill Farm, Rainworth, Nottinghamshire and later at nearby Inkersall Grange Farm. One of the farm labourer’s working in the fields there just happened to be my Great Grandfather in-waiting, Joseph Hawkes. My imagination pictures the lowly labourer flirting with the bailiff’s step-daughter at a harvest festival dance or holding secret trysts behind the cow sheds. However romantically Hardyesque it might have actually been, Joseph and Julia Annie were married in 1901. It could have been so different though if Annie’s father hadn’t died in 1889. If he hadn’t then she would have remained a ropemaker’s daughter in a village 10 miles away…

Joseph Hawkes own father (also called Joseph), a native of Stow-on-the-Wold , Gloucestershire, only relocated to Nottinghamshire in 1874 upon leaving the army early following ill-health. Despite having never been there before, he chose to take the train to Nottingham directly from his demobilisation rather than return to Stow. It would appear that he did this because his Grandfather had already gone there to seek work in the Nottinghamshire coalfields – I presume that Joseph had the same idea in mind. Joseph senior married my Great Great Grandmother Charlotte Barker in Nottingham the following year, but what if his Grandfather had not made that move first?…

My paternal Great Grandparents, John Henry and Polly Williams, met after a football match in 1897. He played in the game and she served the after-match ham sandwiches. He ate rather more of them than he needed to. The result of the match was that they were married in 1902… but that after-match tea probably wasn’t compulsory and what if he was unable to play in the game for any reason on that particular day? 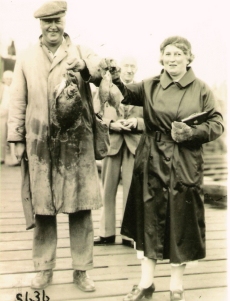 John Henry and Polly Williams in 1937 with a fish… but it was ham sandwiches that brought them together.

A search for employment, an appointment made at a hiring fair, the ripple effect of decisions made by family members, the consequences of ill-health, choices made about where we live, our sporting predilections and our food preferences. In little more than a century of time, these are just some of the influences that led to forbears of mine coming together and which, in turn, manufactured my existence. These meetings were as much down to chance – or a string of chances – as the spin of a roulette wheel or the consequences that flow from the time and day that you happen to be walking down a particular street or looking in a particular direction. It’s family history equivalent of the movie ‘Sliding Doors’.  This is the essence of my fascination for genealogy and I was keen for it to be one of the backdrops to The Daylight Thief.

How lucky I am – how lucky we all are – that chance has given us a lifetime.