The Old Lady by the River.

In homage to a special lady’s 120th birthday, I’ve shared my article which first appeared in Issue Three of the wonderful ‘Bandy & Shinty’ fanzine @ http://www.bandyandshinty.com many thanks to Dave and Co. for their permission to re-publish it here.

Well, hello… it’s good to see you again. What have you got in store for me today, I wonder?

Each time I set eyes on you, as I step onto Lady Bay Bridge, my heart beats just that little bit faster. Now, that might be down to my apprehension about what is to come, but there is no doubting your beauty and majesty all the same. The sight of you under floodlights, the twinkling Trent lapping at your feet, boats dancing in your shadow – all this stirs the blood like nothing else. I can see it too in the eyes of others walking over the footbridge, their conversations tailing off as they are drawn by your magnetic pull. It can only be that lingering, tantalising, tingle-making promise of good times to come that does this. Good times? We’ve shared many of them over the years, so we know what they feel like don’t we? After all, we go back a long way, you and I?

Now, let’s see… when did we first meet? I reckon it was the summer of ‘69. I was five. You were seventy-one, but I’m happy to brush the age difference under the carpet if you are. I was perched upon my Dad’s shoulders, in your old East Stand, transfixed by the colours shimmering in the sunlight. It was a beautiful scene; your emerald green grass decorated by dots of red, white and sky-blue. Nottingham Forest versus West Ham United, world cup winning stars an’ all. It was the first of many portraits of you that are now permanently etched into the gallery in my memory. I think we won that day, or at least that is the impression I have now, meaning that ours must have been a starred relationship from the start.

It’s funny… I don’t remember the noise of the crowd back then. I say ‘It’s funny’, because no one can roar like you do. You give me goosebumps like no other and you can leave my ears ringing for hours afterwards. 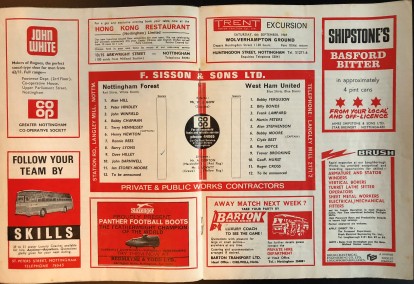 The ‘old’ first division passed me by if truth be told. I was too young to know any different. Instead, you were the theatre where my first clear football memories consist of solid supporting actors like Tommy Jackson, Miah Dennehy and George Lyall, plying their trade in the old second division. To the tune of ‘Robin Hood, Robin Hood, riding through the glen’, they set the stage for ‘Sammy’ Chapman, ‘Bomber’ Bowyer and the great Duncan McKenzie, who topped the bill.

That FA Cup match against Man City sealed the deal. McKenzie’s overhead kick was a masterpiece painted on your canvas, a beam of sunlight providing the spotlight for his acrobatics at the Bridgford End. I remember that moment, together with the preceding intake of breath and the subsequent release of elation, just as clearly as the moment it happened. It’s the same with the eponymous mist, as it poured in waves over your main stand in a match against Southampton, and the moment that I leaned against your low white wall in the East Stand, holding my frozen breath, as David Jones blasted in an FA Cup equaliser against Spurs in the last game BC (Before Clough). You atmospheric old thing, you.

It was largely from the wide-open spaces of your Bridgford End that I witnessed the miracle years. You were often bursting at the seams, so popular were you; both a palace and a temple to the genius of you know who. We had a stool, my Dad and I, hand-painted red and white with the Forest logo on it. It fitted snugly onto your concrete steps. At first it was me who stood upon it under the open skies, but, in time – as I grew, it became my Dad’s perch. From it we witnessed greatness together; Robbo’s stardust glittering along the wing, Barrett’s dream goal against Liverpool, the rumble in the mud against Cologne… I could go on.

We grew up together too, you and I, our lives organically entwined… family, you could say. You fed and entertained me. I brought my girlfriends to meet you. Alas, they were never as taken with your charms as I was. Once, I thought that a pulsating New Year’s Day game against Liverpool might have done the trick. Phil Starbuck’s goal equalised in dying minutes by that rotten spoilsport Ian Rush. Result aside, how could anyone not enjoy a battle royal like that? Unfortunately, I had forgotten about the impact of your roofless stand, the driving rain and wind-chilled, below-freezing, temperatures. My wife-to-be, soaked, shivering and blue to her bones, politely informed me that she didn’t want to meet you again. Nothing would keep me away from you though. 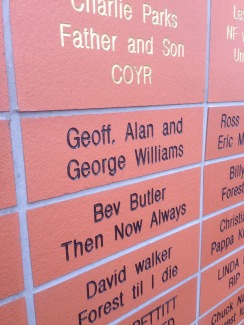 Things turned full circle, however, and, when he was five, I introduced my son to you. I bet you were as amused as I was as he held his tiny hands over his ears for the entire game, such was the tumult of noise you created. What a game to start with though – PVH in his pomp and a 5-2 thrashing of Charlton Athletic. He still comes to pay his respects to you by the way, my son. It’s in the blood you see. Three generations; my Dad, me and my son have paid homage to you and now we have a brick (well more of a tile really) with our names on it, stuck to your wall at the Trent End. We were always part of you and now that is true in the physical sense too… and I also have my very own piece of your real estate – a seat in the Trent End and a square foot of concrete to call my own.

In our forty-nine years together, we’ve shared promotions, relegations, sadness and joy, optimism and uncertainty. You’ve aged well, old girl, probably better than I have, with your sexy curvy additions and hi-tech adornments. Although, I think it’s not too impolite to say that you still probably need a lick of paint and an application of filler here and there… but don’t we all? There have been many rumours of your demise during that time, but they turned out to be greatly exaggerated and you’ve outlasted your predecessors. You are a stubborn old lady.

The fare served up on your stage now isn’t as thrilling as it once was, and the atmosphere has been a little corrupted of late, yet you keep luring me back. It has got to be more than the taste of your Balti pies that does this, even if you do still conjure up the odd, rare, spine-tingling moment. Some might say it’s habit… or simply my need to wallow in the glow of those once-in-a-lifetime golden memories. I tell myself that the good times could happen again… but I am keenly aware of what they say about ‘hope’ and what it does to you in the end. It could be that, like a marriage, we have just been together for too long now to consider divorce. Maybe, it’s all of these things.

The Old Lady, still wowing them at night.

No… I think I know what it is that keeps drawing me back into your temptress arms. It’s the knowledge that when the good things happen upon your stage, they feel so good… so euphoric, that it makes me feel good about myself too. More precisely, you … my beautiful old lady by the river… make me feel good about myself. When that happens, it transcends the all bad stuff.

The 19th Century World of The Daylight Thief. 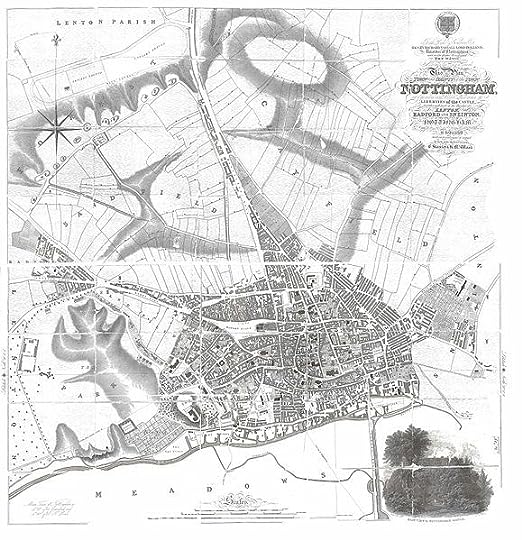 My novel The Daylight Thief inhabits two distinct worlds. It dons both the t-shirt and trainers of the present day and the corseted and behatted attire of the nineteenth century. As the story unfolds though, we learn that the distance between these two worlds is much smaller than we think. So just how different is that earlier world … the world of Jack Follows?

The remainder of this blog post is available via my Goodreads author pages by clicking here.