The Last Rope-makers: The Buckingham family and the end of an era.

This article was originally published in ‘The Nottinghamshire Historian’ in Autumn/Winter 1991. This is my revised text dating from 2008.

According to an obituary published in one local newspaper, the death on 23rd June 1952 of Alfred Henry Buckingham lost Nottinghamshire, “…one of its last remaining links with the craftsmen of old”. Eighteen years earlier an article in the Nottingham Evening News reported that he was the only man left in Nottinghamshire still engaged in making nets, rope and twine by hand. The passing of Alfred Henry Buckingham, therefore, and the demise of Nottinghamshire’s “cottage” rope-making industry were one and the same event.

The beginning of the story, however, can be traced back beyond Nottinghamshire, to within the shadows of Oxford’s dreaming spires, over a century before Alfred’s death.

Alfred’s father, my Great Great Grandfather, Henry George Buckingham, was born in Oxford on 11th October 1837. Henry was one of eight children, the son of John Buckingham, an Oxford University Policeman (the universities had set up a forerunner of modern Police forces in 1829). Neither Henry nor his four brothers followed their father’s footsteps, however. Three of them, Henry, Thomas and Alfred became rope-makers. Thomas eventually moved south to make his life in Plymouth, where the naval dockyards would have provided a thriving demand for rope. Henry and Alfred moved north to the agricultural heartlands of Lincolnshire and Nottinghamshire.

On 22nd March 1863 Henry married Julia Ann Floyd in Oxford. Shortly thereafter he took his new bride to live in the village of Ollerton, a hundred and thirty miles away in North Nottinghamshire.

We don’t know what prompted Henry to move such a distance away from the bustling Oxford suburb of Jericho to a sleepy country village, but he was to establish three ‘rope-walks’ in his new home. The first was on Newark Road, followed by two larger ones situated on Wellow Road and Hopyard Lane (behind the Hop Pole Hotel). Alfred Henry, Henry and Julia’s first surviving child, was born in the village on 31st March 1869 and from an early age he helped his father in the rope-walk . Young Alfred Henry started making nets at seven years old and soon afterwards he learnt how to make finished ropes.

On 9th August 1889, however, that great ravager of pre-Twentieth Century populations, Phthisis (Pulmonary Tuberculosis) claimed the life of Henry George Buckingham. He was fifty-one years old and had evidently been suffering from the disease for over two years. Alfred Henry, aged just twenty years old, was now the head of the family business.

A rope-walk was a strip of land up to a thousand feet long where the rope-maker set up his primitive machinery and stretched and twisted sometimes vast lengths of hemp into rope and twine. The three rope-walks running simultaneously represented the peak years of business for the Buckingham’s. The Newark Road site was used for making cart ropes, plough lines, washing lines, cords and twines. The other two rope-walks, being longer, were used for making ships cables and other very long ropes. These ropes were a ‘standard coil’ measuring a hundred and twenty fathoms in length. There was also a shop, in Church Street, where the finished products were sold.

A description of the Newark Road site exists in the records of the Science Museum in London. It reads:

“It is ninety yards long and twelve feet wide, running nearly east and west with a wall of farm buildings on the southern side. Upon this wall numbers are painted marking every five yards of its length. The land to the south side is laid out as allotment gardens. At the east end is a shed which protects the winding tackle and tools from the rain. Alongside it is the chimney of the tar boiler, where Stockholm tar was heated in a copper to a temperature above that of boiling water. This is needed for certain ropes to be drawn through it, the excess of tar being pressed out of the rope by  weighted beam.

The rope-walk is open to the sky – a neat cinder path with grass verges in which at intervals of about twenty yards are ‘T’ shaped posts of hand height, called “bearers”. In the horizontal bars of these posts are wooden pins, which keep the lines of rope or yarn separate and clear of the ground”.

Alfred Henry Buckingham related in later years that, in his early days as a rope-maker, if the rope-walk wasn’t long enough, hemp was stretched out across the main street to complete the work. Such was the tranquility of the country village before the reign of the motor car began.

The rope making process was an ancient one. Rope making scenes using similar methods to the one used by the Buckingham’s were depicted on the walls of a fifth dynasty tomb in Thebes. As the centuries passed rope became a much prized commodity performing an indispensible role in shipbuilding and agriculture. Rope-walks became part of the pre-industrial landscape (proliferating especially around ship-yards) and even today you can find reminders of these bygone craftsmen in the street names of our towns and cities.

Hemp, from long experience, was discovered to be the fibre most suited to rope manufacture. Originally hemp would have been combed and spun into yarn by the rope maker, but in later years it would have been purchased pre-prepared. Various types of hemp were available and each produced a different product. Italian hemp was the most prized with other materials also used including sunn, jute, sisal and Egyptian cotton (the latter evidently the best for making clothes lines).

The spun hemp (referred to as a yarn) was ‘laid’ or twisted into strands (a strand was usually made of three yarns). They were twisted by fastening them onto hooks in a ‘tackle-board’ before being turned by a large cogwheel. As the hooks were turned the yarns twisted together to form strands. During this process the yarns were stretched to equal tension supported by the posts along the rope-walk. Finally the strands from several yarns were combined again (by twisting) to form a completed rope. The finished product was then wound on a star handled reel. Plough lines and clothes lines were formed into a ‘knot’ (clothes lines are still purchased in this form) by being looped around two pegs in a hand reel. In a rope measuring 100 yards, about 150 yards of hemp was used. About a third of the total length of hemp was taken up in the twisting process.

By far the largest user of rope was the shipping industry. This was clearly the attraction for Henry George’s elder brother Thomas when he moved from Oxford to Plymouth. Its value in these locations meant that demand outstripped the supply produced by the large dockyard rope-walks and professional rope thieves were common. Most of the Buckingham ropes from Ollerton were sent to the dock towns of Hull, Grimsby and Gainsborough.

Second to the demand from the shipping industry was the business generated from the agricultural community of North Nottinghamshire. Before mechanisation took hold rope was a staple component of the farming industry and at the zenith of production in the 1870s and 1880s the Buckingham’s employed twenty people in the rope-walks of Ollerton.

Alfred Henry Buckingham at work on the Rope-Walk c 1950.

The boom years, however, came to an end. Since the begining of the nineteenth century a series of inventions were patented, including Cartwright’s ‘Cordelier’, Huddart’s spinning machine and Norvell’s ‘endless’ ropemaking machine which produced strands and ropes at the same time. Larger businesses grew up on the new industrialised processes to take an increasing share of the market. Overseas competition began to loom large, most notably from the United States. The demand for the finished product itself also began to wane. Sailing ships were replaced by steam ships constructed from iron and steel and agriculture became more mechanised. However, it was the advent of synthetic fibres, which escalated following hemp shortages during the Great War, which sounded the final death knell for the village rope-maker.

Henry George Buckingham’s brothers also fell victim to this slump in demand for rope. Elder brother Thomas was listed as a rope-maker on the Plymouth census until 1881. By 1891 his occupation was given as ‘labourer’. At his death in 1895 (from “exposure to the sun”) he was working in a wood yard. Younger brother Alfred also moved north, initially to Lincolnshire, his occupation was described as ‘ropemaker’ at the time of his marriage in Grantham in 1870. By 1871 Alfred and his new wife Millicent were living with his brother Henry George and family in Ollerton and assisting with the ropemaking business there. By the mid 1870s they had moved to Newmarket, Cambridgeshire, close to where his mother Elizabeth and sister Clara were now resident. He died there in 1878 (also from Phthisis) whilst working as a stableman.

In Nottinghamshire in 1881, according to Kelly’s Directory, there were twenty-nine rope and twine makers in the county. By 1936 there were twelve, mainly larger businesses. Alfred Henry himself, accredited as being the last producer of handmade ropes in Nottinghamshire, was now using only one rope-walk (Newark Road for which he paid a £1 quarterly rent to Baron Saville’s Rufford Estate until 1939, when the estate was sold off) with only a single additional employee. This was despite the widely recognised quality of Buckingham rope which was used as far afield as Africa and New Zealand.

Alfred Henry refused to compromise on the quality of the finished product, he once said, “The great trouble you know is that ropes last so long. Dealers ask if I cannot make clothes lines of worse quality, but I refuse”. During the leaner times he tried his hand at other things. For a time he collaborated with a certain Mr. Hibbs, an Ollerton Wheelwright, to make bicycles. He also supplemented his income by delivering mail in the Rufford district. However, nothing could stop the village rope-maker from joining the blacksmith, the wheelwright and the miller, only to be found in the annals of folklore. 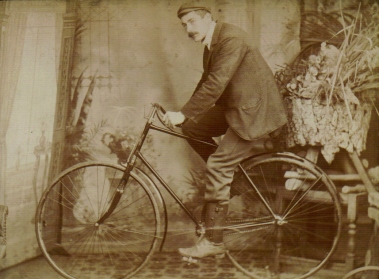 The tiny village of Ollerton now probably goes unnoticed by most motorists travelling along the busy A614 which now bypasses it. The village retains a certain sleepiness with its cottages and a working waterwheel (now a popular tea room) that leads the visitor to conclude that little has changed over the past century or so. Listening to the gentle flow of the River Maun running through the village and even despite the hum of traffic from the busy main road nearby, one can even imagine that it is quieter now than it was then. But things have changed, of course. Alfred’s rope-maker’s cottage is still there, however, and so is the site of the Newark Road rope-walk, which is now overgrown and forgotten. There is nothing at the site to remind anyone wading through the weeds that hemp was twisted and stretched into rope, in vast quantities for nearly a century in this place.

Alfred Henry Buckingham died, aged 83 years, at the home of his daughter in Eakring, Nottinghamshire. He is buried in the churchyard there. All traces of his trade and the Buckingham rope-making heritage were not lost, however.  A number of years before his death he bequeathed his equipment to the Science Museum in London and after his death, nearly ninety years after his father first made rope in Ollerton, the tools of his trade were removed to Kensington. They now lie in a Science Museum warehouse in the south of England alongside other relics of Britain’s forgotten past.

Rope-makers in the Buckingham family (circled).